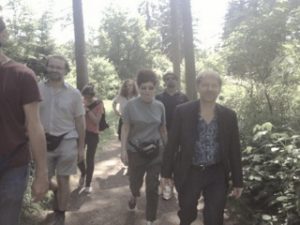 Ten performers are walking on the  Goethe-Hiking-Trail in Ilmenau. One after the other.  Each of them can speak a foreign langauge and they are provided with headset-microphones and recording tools. They are talking without interruption,  alway staying in the presence and reacting on their surrounding. At best they react on their own speaking and create a short cirquit between seeing and speaking.

Half of the way they enter the wooden Goethe hut, where they find 15 translations of “Wanderers Nachtlied”, Goethes most famous poem, printed on glass plates hanging on the wall. They simultaenously interprete the translations back into German. (translations provided on headphones for the project).

Autmatic speaking has been developed on the background of  Echtzeitmusik, a form of improvised music, that has its origin and scene in Berlin.

One of the protagonists of the  Echtzeitmusik scene is Axel Dörner, who is one of the performers in Goethe to go.  As in music it is both, about letting loose, and listening to your own improvisation and control it.  Permanent repetition is a mean to direct the overall jumping of thoughts into a soundstream with musical qualities.

Automatic speaking is inspired by écriture automatique  of the French surrealists, by the  stream of consciousness of James Joyce, the multiperspective painting of cubism, the writing langscapes of  Carlfriedrich Claus, the Berlin echtzeitmusik- scene and constructivistic perception theories.

It is not about supposed objective representation of nature like in a  sound scape, but rather a trial to reconquer the subjective perception of our surrounding which if often hindered by screen watching.  A playing field accessible to everyone and everytime.